Running a radio station 24/7 while being a full-time student is challenging all on its own. Adding a pandemic to the mix can stress even the most skilled leader.

Alex Strouf, a senior from Denmark, Wis., says the challenge made him, and 90FM, better.

“With COVID, everything changed so fast,” he said. He is station manager of WWSP 90FM, the student-operated 30,000-watt campus radio station with a strong community following in its 60-mile broadcast radius.

As the pandemic emerged, Strouf arranged an extended interview on air with Dr. Helen Luce, Student Health Service medical director. He and his staff provided programming and created several public service announcements about COVID-19. They ensured WWSP was a key communication channel for the campus and community.

Strouf worked with university officials to adopt sanitization practices early and implemented safety protocols the station continues to follow. With donated disposable masks, they implemented a mask mandate before it became campus-wide policy.

“It was really important as a leader to make the right choices, not under- or over-react. We did, and we are operating at a higher level than ever before,” he said.

WWSP was one of few campus radio stations that remained on air through the pandemic. Many suspended broadcasting between March 2020 and fall or even later as universities, states and the nation shifted to remote work and limited in-person gatherings.

90FM was also one of few UW-Stevens Point student organizations that continued when campuses shifted to virtual learning after spring break in 2020. Many of the station’s student volunteers stayed home, and staffing was stretched thin, Strouf said. They met virtually, worked through operational challenges and addressed individual concerns. “We adapted, grew and completely changed some roles.

“I believe it is important for students to still have a hands-on experience and a location on campus to have fun and learn, despite the circumstances,” he said. “I can happily say we have safely done that.”

He was nominated by Steve Suehring, WWSP faculty adviser and general manager, who said Strouf is an adept, inclusive leader motivated to achieve more for himself and those around him.

“As a result of Alex’s leadership, the executive staff understands and respects each other’s strengths and job roles, working together to make the station better while learning and crafting their broadcast skills,” Suehring said. “Alex has an open and transparent leadership style, promoting inclusivity and giving everyone a voice. Alex is not afraid to take on challenging situations and solicits feedback regularly.”

“Being a great team isn’t about having a bunch of people who are the same,” Strouf said. “It is about people that can bring the best out of each other.”

And while he’s honored to receive the Student Leadership Award, Strouf also points out the 90FM team won eight WBA awards ranging from sports and news writing to long-form documentary.

They learn, grow and have fun at the eclectic station, Strouf said. “It’s such a cool, unique environment. It’s almost intoxicating.” For some students, 90FM is why they stayed enrolled at UW-Stevens Point. For many alumni, it’s a reason to stay connected.

Students with various interests get involved, Strouf said. The executive team includes those majoring in biology, history, business, soils management and communications, like Strouf. WWSP is one of several hands-on learning experiences available to students. The Pointer and SPTV are others.

“There are opportunities for everyone. If you have zero experience, we’ll still throw you in the DJ slot in two weeks,” he said. Those new to the station learn from students as well as seasoned community members.

As station manager for two years, Strouf leads by example. “It’s important to be communicative, open-minded, dedicated, understanding, and accountable.”

Besides that, he said, “It’s ridiculously fun.” 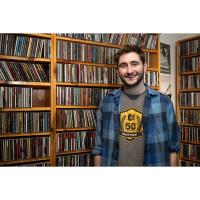