Thomas Gibson officially begins his duties as the 15th chancellor of the University of Wisconsin-Stevens Point’s three campuses today (Jan. 11, 2021).

He is focused on three key goals:

“These three imperatives will guide our institution into the future,” Gibson said. He will spend the next few months operationalizing these priorities, learning more about what UW-Stevens Point is currently doing and building on existing successes.

He served as vice president for Student Affairs and vice provost at Bowling Green State University near Toledo, Ohio, from 2016 to 2020. In that role, he advocated for the academic and social development of students, devised institutional policies, engaged in strategic planning, led student success efforts and helped set record student retention. He oversaw the Office of the Dean of Students, Greek life, residence life, diversity, equity and inclusion; student health, recreation and wellness; the women’s center, Title IX and Clery Act reporting.

Gibson has enhanced student success and diversity in numerous higher education positions. He was associate vice president of student affairs at Ball State University in Muncie, Ind. He held several roles at York College, City University of New York in New York City, including associate dean for student development. He has also taught at the graduate and undergraduate levels and has been involved in fundraising.

“Helping more students succeed is a top priority for me,” he said. Like nearly half of UW-Stevens Point students, Gibson was the first in his family to attend college. “We will leverage the collective strength of our institution, the engaged teachers and scholars who serve as faculty and staff, in our shared purpose: supporting student success.”

He’s eager to meet faculty, staff and students at all three campus locations. He said he is also looking forward to meeting community members and alumni and learning how UW-Stevens Point can build on partnerships and serve as a resource to meet community, regional and state needs.

He and his wife, Brigette, have a daughter, Kennedy, age 4. They are already getting to know northcentral Wisconsin and look forward to becoming involved in the community. 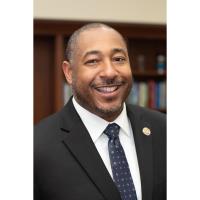