The WCA last week presented Shankland with its “Outstanding Legislator Award” for her work on behalf of county government during the 2019-20 Legislative Session.

WCA’s executive director, Mark D. O’Connell, said Shankland had “worked diligently” for counties in her district, and the WCA was grateful for her work and vision. “We are proud to present her with this award and her dedication to effective governing goes beyond the confines of Assembly District 71, with an impact felt in all 72 Wisconsin counties,” O’Connell said.

The award is presented biennially to a select group of legislators who have represented county interests in both the legislature and in their districts on key issues including legislation and the state budget.

WCA represents the interests of county government both on the state and federal levels and is headquartered in Madison. For more information, visit www.wicounties.org. 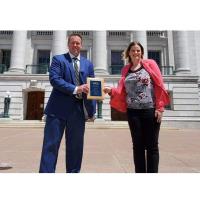