STEVENS POINT, Wis. (June 11, 2020) – The Stevens Point Area Convention & Visitors Bureau (SPACVB) has announced plans to move its Visitor Center and administrative offices later this year. The move is possible due to an agreement with Sentry, giving the SPACVB the opportunity to create a space to better address the needs of the local travel industry and its visitors for decades to come.

The new space will be located at 1105 Main Street Suite A, Stevens Point. Clay Corner Studio most recently occupied the storefront, which exists within the same building as the Sentry IT Co-op. The build-out for the new location will begin this month. The SPACVB is expected to occupy its new space by the end of the year. Sentry has purchased SPACVB’s existing Visitor Center at 340 Division Street North in Stevens Point adjacent to the mutual insurer’s new office. The company plans to repurpose the building.

“So much has changed in the tourism industry over the past 21 years,” said Sara Brish, executive director of the Stevens Point Area Convention & Visitors Bureau. “This location has served us and our visitors well, but we must look forward and plan for the future.”

Built in 1998, the Visitor Center on Division Street was positioned strategically between central Wisconsin’s largest hotel and convention center (what was the Holiday Inn) and one of the busiest Kwik Trips in the state. Today, much of what set the Division Street location apart as an ideal spot has been eliminated. As the neighborhood changed, with the closure of the hotel and relocation of the gas station, and the advent of digital resources and GPS, it became less of a logical fit to meet the current needs of visitors traveling in the region.

Since 1986, the SPACVB has been serving all of Portage County as the recognized destination marketing organization. It promotes the region as a tourism destination for meetings, conventions, sports, and leisure visitors.

“One thing that won’t change is our dedication to continue to serve as the hub for information about things to see and do in all of Portage County, for locals and visitors alike,” Brish added. The new location will be an ideal location to connect with visitors and an opportunity to point them in the direction of more experiences that call the Stevens Point Area home.

Sentry opened a new state-of-the-art office in 2019 adjacent to the existing Visitor Center. Much like it did when it purchased the vacated hotel property in 2011, the company aims to put the former Visitor Center location to good use after the SPACVB moves.

“We don’t have specific plans at the moment. We take to heart our responsibility as a civic partner, economic driver, and contributor to the quality of life here in central Wisconsin,” said Elisha Robinson, chief planning officer for Sentry, which employs about 2,500 people in the Stevens Point area and more than 4,400 nationwide. “The community can be confident we’ll find the right purpose for the building.”

The Stevens Point Area Convention and Visitors Bureau is an economic and community development organization whose purpose is to expand Portage County’s economy by attracting conventions, sporting events, and leisure tourists to Portage County. Millions of dollars from visitor spending and increased tax revenues are generated to increase commerce, sustain jobs, and create a desirable destination. 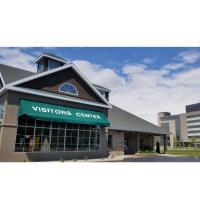