“There are many elementary aged students who do not own a winter jacket within the Stevens Point Public School District and parochial schools,” said Jason Pettis, Chairman of the Stevens Point Fire Fighters Local 484 Charitable Foundation, Inc. “Operation Warm’s goal is to provide every student in need a new winter jacket. Prevail Bank’s donation helps ensure that goal is met.”

Stevens Point Fire Fighters Local 484 partnered-up with the International Association of Fire Fighters (IAFF) and Operation Warm in 2015. It has provided new jackets to elementary-aged children every year since.  Last year, 300 jackets were purchased, personally fitted to every student, and handed to them with their name written inside. To date, they have 335 requests. Donations to Operation Warm are still being accepted at: https://www.paypal.com/US/fundraiser/charity/213959.

The Charitable Contributions program of Prevail Bank is available for local non-profits that help local people in need, especially those with low-to-moderate incomes; stimulate communities financially; and/or enhances the standard of living of those less fortunate. If an organization is interested in applying for funds for a major initiative, go to:   Prevail.bank/resources/community.  Prevail Bank is continuously looking for ways to give back, help their customers pursue their dreams, and make things better in central Wisconsin. 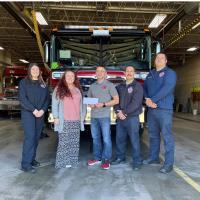